De Tomaso is one of the many Italian brands that specialize exclusively on sports cars. Unlike their more renowned compatriots, De Tomaso was very unlucky in their existence. For the majority of their life, they were a subsidiary of other car companies and were liquidates several times over. Like many other Italian manufacturers, the name of the company is basically a surname of the founder, Alejandro de Tomaso. Although he was Latin American by descent, he decided to stick to the usual rules of Italian brand naming when he started the company in 1959. The company didn’t enjoy the variety of emblem since that time. Until their liquidation in 2004, De Tomaso used this emblem and their official logotype and the badge of their cars.

It’s a rectangular vertical badge with a thick black and silver frame. The blue and white tricolor inside the badge is obviously the colors of Argentina, the homeland of de Tomaso. Each stripe is almost indistinguishably framed in thin silver lines.

As for the black symbols in the middle, they are purposefully positioned to resemble the letter T, but they are also the symbols used to brand cattle where de Tomaso grew up. Or so says the legend. The company wasn’t too successful, and by the beginning of the 21st century they have severely fallen out of favor by the customers. In 2004 the business had to be closed down, although the rights to produce DT cars were acquired in 2009 by an independent entrepreneur.

It’s unknown what the black shapes are supposed to represent. Obviously, they are a stylistic depiction of the letter T, but why in this shape? It’s possible that the then-owner of DT tried to show faith in the brand and organized the emblem into a kind of horseshoes, which usually bring luck.

There was also a writing ‘De TOMASO’ beneath that was written in strict thin and pleasant letters. The rights were once again sold off in 2014 and 5 years later the new owners decided to finally reanimate the brand.

The logo returned to its iconic look, although some details changed. It was greatly simplified: all the 3D elements, the silver framing and the shades vanished. In addition, the black symbols in the center were also stripped of their usual appendages and details, making them look much more pleasant.

The logo itself looks much more pleasant now. One can only hope it won’t change too soon. When the tricolor badge was used, the company used to put it on the front of their cars as a badge. It was in accordance with the usual rules – a rectangular vertical badge with some unique shape in the middle. In 2009-2011 it was obviously scrapped in favor of the horseshoe construction, which was polished and put, as usual, in the front. 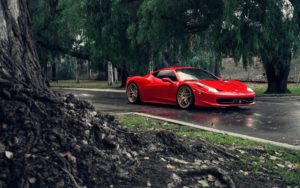